John Carter of Mars to be filmed in Moab

John Carter of Mars to be filmed in Moab
Beginning in April, Disney Studios will film the science-fiction fantasy movie “John Carter of Mars” (also known as "A princess of Mars") in the Moab area. Preliminary work already is under way in London. Disney crew members scouted the world for a location resembling the reddish planet Mars. Film crews have been in Moab for more than a year, said Tara Penner, director of the Moab to Monument Valley Movie Commission.
The Disney cast and crew could pump nearly $60 million into the Moab-area economy during filming, which likely will take several months. In addition to filming the movie in eastern Utah, Disney plans to hire nearly 400 people to help with the movie in areas such as construction, security, and production and location assistance. Preference in hiring will be given to Utah residents, but residents from Western Colorado could be considered for jobs. People interested should immediately send a resume detailing previous movie experience to tara@moabcity.org.
For more details about the kind of jobs needed for the movie production, go to www.moabcity.org/filmcommission/production_directory.html.
News in ERBzine
Posted by wourpet at 2:26 AM No comments: 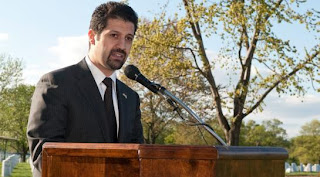 9 April 2010
Washington (KRG.org) – The Kurdistan Regional Government of Iraq’s Representative to the United States, Qubad Talabani addressed the ceremony at Arlington National Cemetery commemorating Iraq Liberation Day. Members of American and Iraqi forces, including members of the Peshmerga, attended the event, alongside veterans and family of those soldiers who have fallen in support of Iraq’s freedom.

“On this day, it is appropriate and right for us to commemorate the sacrifices made to liberate Iraq from decades of brutal tyranny under Saddam Hussein,” said Mr. Talabani. “So to be absolutely clear: Iraq thanks you. I thank you. And the people of Iraq’s Kurdistan Region, most of all, thank you.”

During the ceremony, members of American and Iraqi forces laid wreaths at the joint gravesite of fallen soldiers from the U.S. and Iraq. Ms. Hayyam Sami Mahdi Al-Shather and Ms. Debra Argel-Bastian, whose husband and son respectively are buried at the site, attended and spoke at the event. Iraqi Air force Captain Ali Abbas Rubaie, Ms. Al-Shathers deceased husband is the only Iraqi buried at Arlington Cemetery.

“Today, we must thank those who have helped us get to where we are,” Mr. Talabani said. “Because although we face complicated political problems, the majority of the political forces and people who guide Iraqi society want to live in peace. They want to live up to the promise that American forces have given us.”

The third annual Universal Remembrance Ceremony at Arlington National Cemetery ended with a reading of a keynote address from KRG Minister for Peshmerga Affairs by Representative Talabani.


Kurdistan Regional Government (KRG)
Posted by wourpet at 11:50 AM No comments: